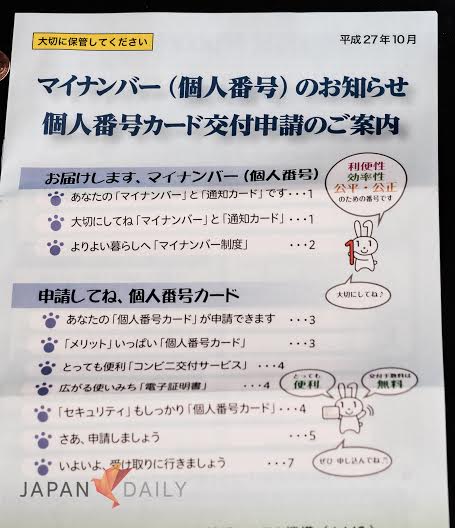 The Abe administration’s new, somewhat Orwellian personal tax ID system (税番号制度）dubbed “My number,” has drawn heavy criticism not only from opposing parties, but even from longtime Abe supporters. Concerns about privacy, the safety of personal information, and a lack of transparency rank high among critics complaints, but there is one aspect of the plan that has not been discussed much. The self-applied nickname itself, “my number” is just poor English. This may seem like a petty complaint, but it disguises a much deeper problem.

The use of the English word “my” in lieu of “personal” is quite common in Japanese English. It appears in words like マイカー (“my car” – one’s own car) or マイブーム (“my boom” – a treasured personal item). It is easy to understand why, since the Japanese word for “self” is not connected to personal pronouns the way English is. Mixing loan-words with native grammar structures is a natural part of language development and is the backbone of pidgin and creole languages (of which I consider Japanese English or “wasei-eigo” to be a part). The issue is not Japanese English, but the attitude behind government bodies that use it.

Whether consciously acknowledged or not, the perception of Japan’s English by outsiders is not that Japanese have low English levels, but that Japanese people simply do not care about proper English. Consider for a moment the first thing anglophones say when they encounter strange English signs, t-shirts or advertisements: “Why didn’t anybody check that before they used it? Didn’t they think someone might notice?” The inevitable answer to that is, no, they probably did not. The reason being that their intended audience is mostly Japanese, not native English speakers. That sort of fatalism – the belief that it doesn’t matter if the English is proper or not because it’s made for Japanese people who wouldn’t notice anyway – is a major contributor to Japan’s infamously low English performance. To Japanese people who have worked hard to master English, people who have lived abroad, attended international schools or grew up in multilingual homes, I would imagine this attitude is highly offensive. If you don’t think so, imagine if a British company had the same attitude and decided not to proofread or spellcheck their ad copy intended for Japan, and dismissed it by saying “They’re Japanese, who’s gonna’ know the difference.” I doubt they would be afforded the same grace.

This is all good and well for private companies, but it is another thing when it comes from the government who ostensibly wants to make Japan more internationally friendly, especially in light of the upcoming Olympic games. Japan’s low performance in English has been declared a top priority by government, triggering a drastic overhaul of English education starting as early as elementary school. Yet the government itself continues to roll out sloppy English slogans and campaigns that betray a total lack of concern for proper English. From highway signs using the phrase “STOP THE 交通事故”(traffic accident)” or local tourism boards saying “Let’s (insert destination here),” such phrases are abundant. These sorts of campaign slogans and catchy phrases reinforce the idea that English is just for style, and that proper English would be too complicated for Japanese people.

Imagine if officials took such a defeatist approach to other fields of study, such as math or science. It is the drive to excel and rise to meet all challenges that has made Japan a fierce competitor in sports, a global leader in technology and major exporter of pop culture. Perhaps it is not the education system that needs to be overhauled, but the attitude of the people who run it. Forcing children to study English longer and harder will do no good if English is regarded by adults as “too hard” and little more than a way to punch up advertisements. Before we teach children how to study foreign languages, it may be more important to show them why.